Seat’s new Leon, launched this week, is the first mainstream production model to  actively use new technology where its vehicles talk to traffic lights so the driver knows when they’re about to change colour.

The family hatchback uses a new built-in system to communicate with Barcelona’s traffic light infrastructure as part of a test to look at ways of improving road safety, traffic flow and environmental efficiency.

When the Leon approached a traffic light, an alert appeared on the screen saying whether it will be red, green or yellow when the car arrives – and provides real-time data about how long a motorist will need to wait for them to change.

Seeing red: The new Seat Leon has technology that can communicate with traffic lights to work out how long drivers need to wait for a red light to turn green when they’re approaching

The technology can calculate how far away the car is from a set of lights and the speed it is travelling.

The process is known as V2I, or ‘Vehicle to Infrastructure’, where connected cars can interact with infrastructure via an internet connection or wireless local area network, and it takes just 300 milliseconds.

Information from the traffic lights can be shared with the Leon’s infotainment system, so drivers can see how much they are going to be held up in jams.

This isn’t the first time such technology has been trialled.

These could transmit to vehicles with special devices the status of the traffic lights and how long each colour will last.

The alert also advises the best speed at which to drive to ensure they get there just in time for the lights to change to green.

Never stop at a red again? The system trialled by Ford and JLR helps drivers slow or speed up the right amount as the reach the light – it can’t turn them all green for you though 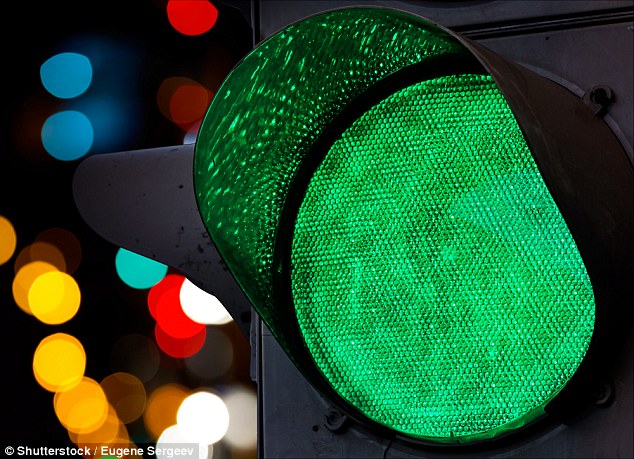 It’s all green from here: The new technology can provide a countdown to drivers telling them how long it will be until a light turns green

It gives a fascinating insight into how connected cars in Britain could eventually communicate with traffic lights and control centres.

The Highways Agency has previously said that ‘co-operative intelligent transport systems’ (C-ITS) will play an important role in the future of Britain’s road infrastructure.

It is hoped the data sharing will improve traffic flow, improve fuel efficiency and lead to increased safety, while also enabling authorities to broadcast messages to a connected car at any point in the road. 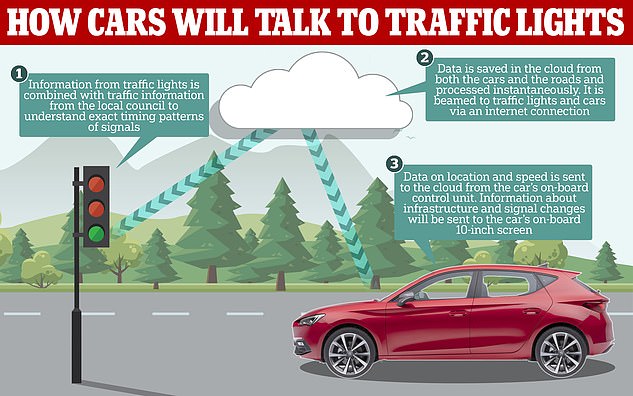 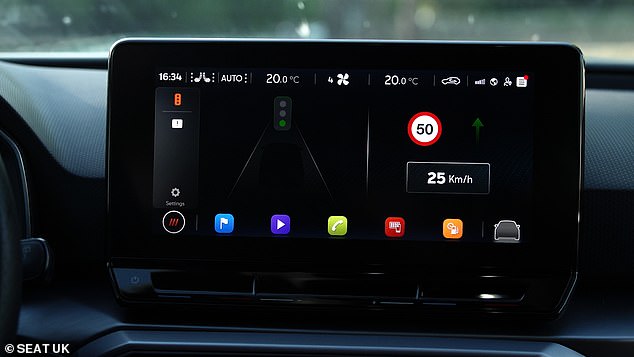 Jordi Caus, head of Urban Mobility Concepts at Seat, said: ‘Queuing at traffic lights can be a frustrating process and it always feels like a ‘win’ when you manage to time your driving perfectly for when the lights go green.

‘With this project we’re taking a first step to connect cars with overall traffic infrastructure.

‘The traffic light sends a signal to the Traffic Authority’s cloud about its current status and when it is going to change.

‘It improves safety by providing advanced information about traffic lights turning red depending on your speed and therefore avoids abrupt braking.

‘This trial showcases how SEAT is looking at ways to use technology and data over human intuition to improve traffic flow, road safety and fuel efficiency.’ 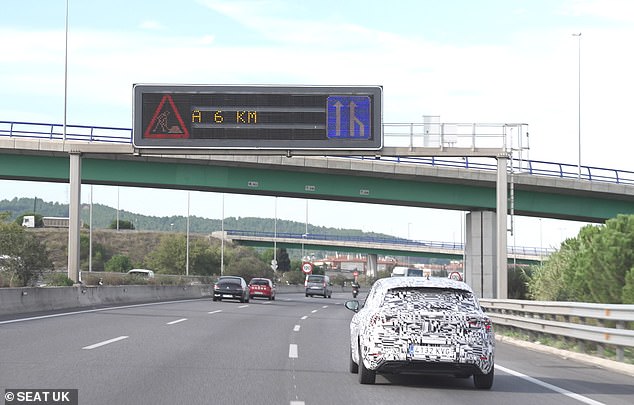 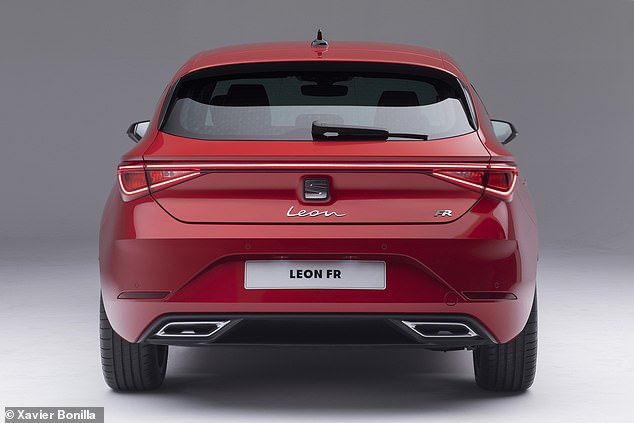 The feature only worked when the car was not exceeding the speed limit and should enable motorists to drive more smoothly.

Seat, which collaborated with the Spanish Traffic Authority, the Barcelona City Council and ETRA on the project, has just officially unveiled the new Leon which is filled with ‘connected’ technology.

The car manufacturer has invested almost £1 billion developing the tech-filled family hatchback, fitting it with a central 10′ infotainment screen, which includes gesture recognition where certain functions can be activated using small finger movements on screen.

It also has a built-in eSIM which allows the eCall service to directly contacts the emergency services in the event of a car accident. 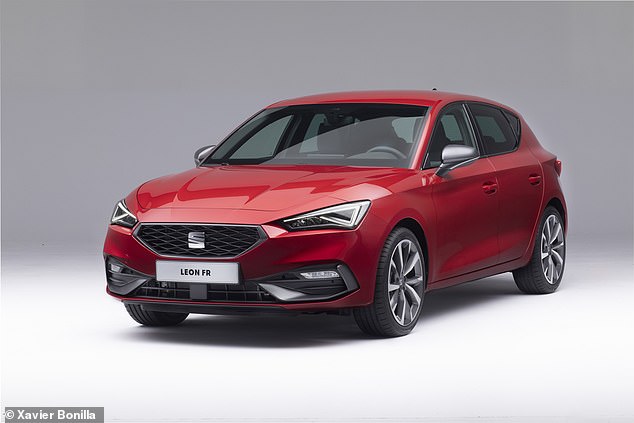 This is the fourth-generation Seat Leon, launched in Barcelona this week 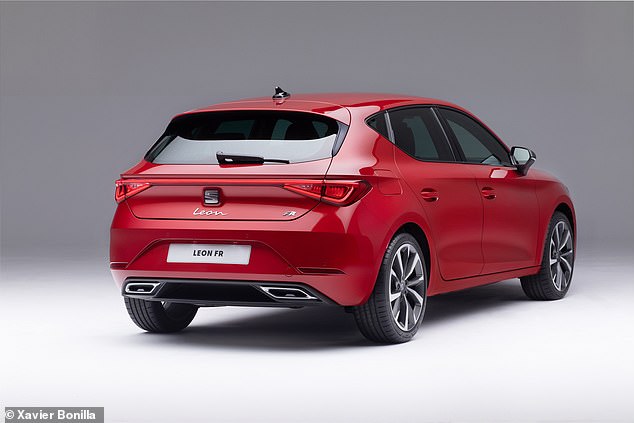 Prices are expected to start from between £18,000 and £19,000, making it a direct rival to popular models such as the VW Golf and Ford Focus

Seat took the wraps off its new fourth-generation Leon range this week with the promise that it will be its safest and ‘most advanced vehicle ever’.

Designed and built in Barcelona, with the first models coming off the production line now, it will be available in showrooms as a five-door hatchback or estate in six trim levels and five colours priced from around £18,000 to £19,000.

Buyers have a choice of eight petrol, diesel and electrified hybrid engine options. These include one-litre three-cylinder 110 horsepower petrol in standard or mild hybrid; a 1.5 litre 150 horsepower petrol engine in standard or mild hybrid; two-litre four-cylinder petrol and diesels; and a 1.4-litre plug-in hybrid with a claimed electric-only range of 38 miles and a battery that can be fully charged in 3.5 hours.

Though not confirmed, customers can expect 50mg-plus fuel consumption from the most frugal versions, with acceleration from rest to 60mph in around seven seconds on the perkiest models.

The new Leon range is based on parent group Volkswagen’s new flexible MQB Evo platform – meaning it will be a sister car to the latest VW Golf, as well as a rival. 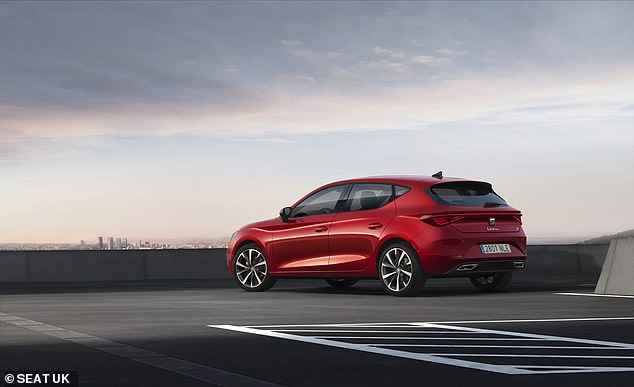 Buyers have a choice of eight petrol, diesel and electrified hybrid engine options 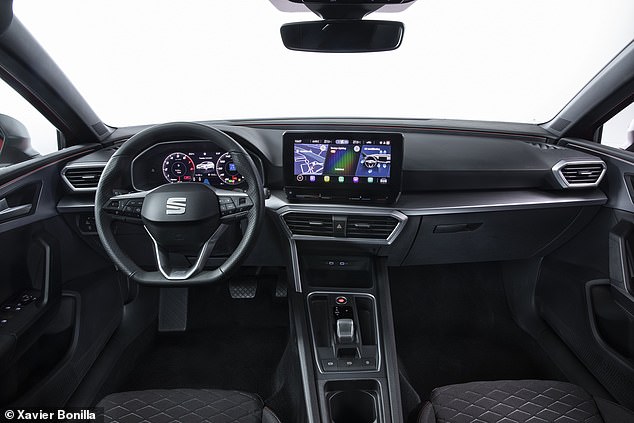 The interior is functional, but not quite as plush and upmarket as the VW Golf sister car 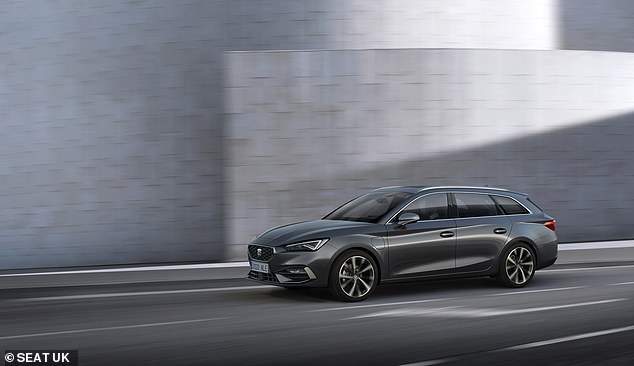 The company says: ‘The next generation Leon is the most forward thinking product ever made by Seat. It’s fully connected to the cloud, with state of the art driving assistance systems and hybrid technology from launch.’

Highlights include a new exterior and interior look, full LED headlamps, wrap-around interior ambient lighting, new safety features including emergency assist and ‘predictive adaptive cruise control’, wireless Apple CarPlay, a smartphone app to keep you in touch with your car remotely when on the move,

Longer than its predecessor, it also promises more headroom, despite a lower roofline.

It has a larger bonnet to make it look more aggressive, a decluttered interior with fewer buttons.

Seat’s sales and marketing vice-president Wayne Griffiths said: ‘We have now created the best Leon ever. The new Leon has been designed keeping the “created in Barcelona” spirit and at the same time being the safest, most connected and with the widest range of engines the brand has ever seen.

‘We believe we have all the ingredients to make of the new Leon a great choice not only for private customers but also for corporate fleets.’