By Danny Gallagher For Mailonline

Martin Keown has launched a passionate response to Jurgen Klopp after the Liverpool manager said himself and his senior stars would take no part in the club’s FA Cup fourth round replay with Shrewsbury.

After squandering a 2-0 lead at the New Meadow, Liverpool added to their fixture congestion woes by booking a repeat fixture into their busy calendar.

Following the match Klopp insisted himself and his side would be adhering to the winter break, meaning youth stars and Under 23 manager Neil Critchley would be taking charge of the fixture. Keown sees this as an offensive decision, and feels Klopp should take a note out of the books of Bill Shankly and Bob Paisley. 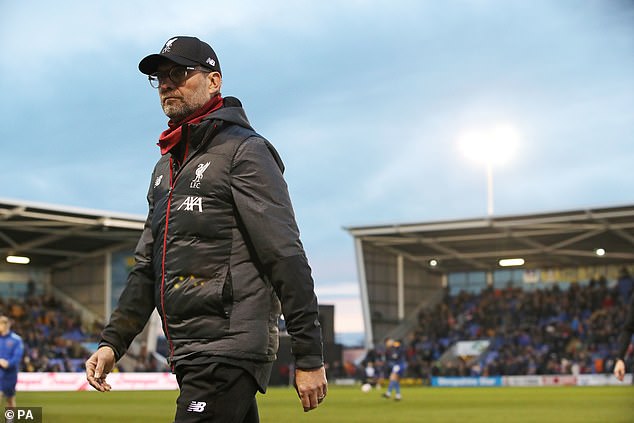 After drawing at Shrewsbury, Klopp said himself and senior players would not be at the replay

Giving his response prior to Bournemouth’s FA Cup clash with Arsenal at the Vitality Stadium, Keown told the BT Sport studio his thoughts on why Klopp should respect the competition and allow his team a chance to win as much as possible.

‘He’s [Klopp] been talking about nothing else [other than congestion] for a number of weeks now. They had the opportunity yesterday to put out a stronger team,’ Keown began.

‘They looked comfortable in that match and it’s probably the most disappointing performance Liverpool have had in the last two or three years, they were a little bit complacent. 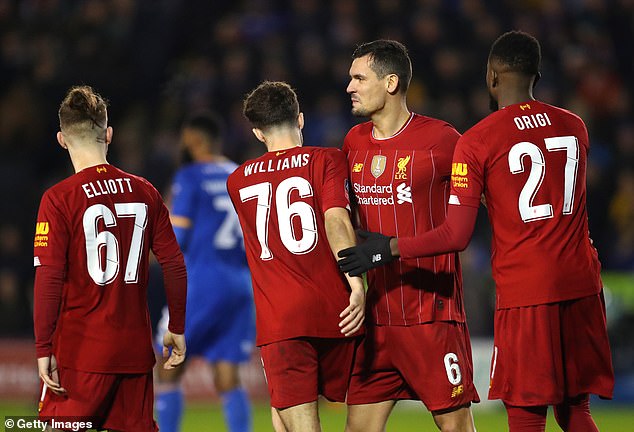 ‘Shrewsbury were magnificent, how they got back into the game. I just feel Jurgen Klopp should maybe reflect on this and come back with a different story. If I was a player in that dressing room I’d want to actually win the FA Cup.

‘This is an amazing Liverpool team, and part of making that team great is winning every trophy so I feel they should put out their strongest possible team. The likes of [Jordan] Henderson, they’ve not won this trophy before. They should be (telling) the manager: “Look, we can do this”.’

A short winter break will allow Klopp to recharge his Liverpool side. They are still competing on the European stage as well as cup and domestic duties.

Keown, however, feels the table-topping Reds should make an exception and capitalise upon their blistering run of form.

‘Just for two weeks, we’re talking about life being different for two weeks, they want a two-week holiday whereas if they change that a little bit and still put a strong team in they can get past Shrewsbury,’ Keown continued. 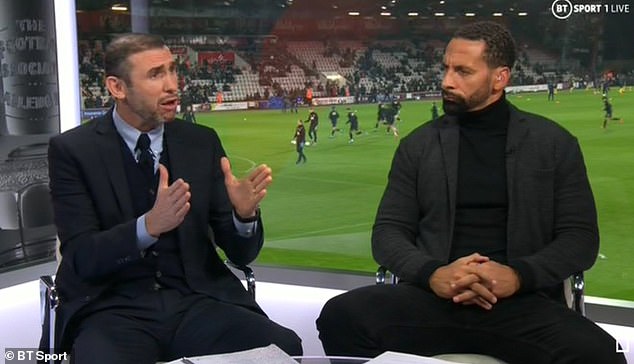 ‘I think Klopp is worried what the FA Cup does to the Champions League and the latter stages, I think that’s the problem. The next round is gonna be played mid-week and it gets even more congested, the Premier League is pretty well won.’

Keown went a step further, comparing Klopp’s action to that of the club’s beloved former bosses Shankly and Paisley.

‘I think they’re talking about playing the team who played against Aston Villa in the Carabao Cup and were thumped, I wouldn’t want to see that situation,’ Keown added.

‘They weren’t playing as many games (then) as there are now though,’ Ferdinand immediately retorted after Keown compared the situation now to teams of Liverpool’s illustrious past.

‘There’s no rule that says he has to play a full team, I’m sorry I just don’t agree.’