By Francesca Washtell For The Daily Mail

Anti-virus software firm Avast fell as an investigation claimed the company had been selling sensitive customer data to huge companies such as Google, Microsoft and Pepsi.

A subsidiary of Avast called Jumpshot had indeed been selling on users’ data to third parties because customers would need to opt out of this process manually and many chose not to.

But the investigation from technology publications Motherboard and PC Mag claimed that many users did not know their data was being harvested and sold.

Anti-virus software firm Avast has been accused of selling sensitive customer data to huge companies such as Google, Microsoft and Pepsi

Avast disputed the claims that users could be identified by the data that was passed on, and it is now changing its terms to an ‘opt-in’ rather than ‘opt-out’ policy when it comes to ‘data scraping’.

And, in a statement to the stock market, Avast said that it could sell or dispose of Jumpshot, as it is not clear if a sale ‘aligns with our values as a cyber security and privacy company’.

But the investigation still wiped off 5.6 per cent, or 27p, off its shares, sending them to 454.8p, following a hefty fall on Tuesday when the reports first emerged. 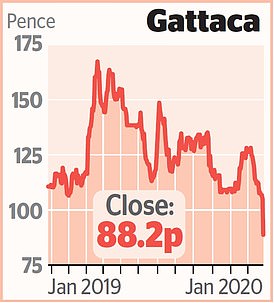 Annual profits at engineering and technology recruiter Gattaca will almost halve to £6million as hiring hit a standstill from August to December.

Its fees income in that time, which covers the first five months of its financial year, fell 11 per cent compared with the same period the year before.

The market has not picked up since the election and the timing of infrastructure projects is still uncertain.

Retirement housing builder McCarthy & Stone slumped 5.8 per cent, or 9.1p, to 146.6p after its major investor Anchorage Capital sold roughly 5 per cent of it at a discount – 43m shares at 145p – down around 6 per cent from the stock’s price of 155.7p. Anchorage still owns 16 per cent.

And train and bus group Stagecoach tumbled 7.7 per cent, or 11p, to 131.2p, after HSBC downgraded it from ‘hold’ to ‘reduce’ and the Government said it would nationalise Northern Rail.

The move comes ahead of a government review of the railways that is due within weeks and aims to overhaul the patchy contract system currently in place.

Budget airline Wizz Air, however, climbed 3.9 per cent, or 162p, to 4272p after record third-quarter profit of £18million between October and December.

It also upgraded its profit outlook for the full year, with the London-listed Hungarian company now predicting it will make between £296million and £300million, up from £283million to £296million.

Engineer Rolls-Royce steamed ahead 2.7 per cent, or 17.4p, to 668.4p after ratings agency Standard & Poor’s put a ‘stable’ rating on its debt on Tuesday, moving it up from ‘negative’.

The ratings are important because they can change how much money a firm can borrow and at what rates – much like an individual’s credit score.

Silver and gold production at mining giant Fresnillo fell after it phased out a mine and got lower quality output from two others in Mexico. But its shares rose 0.03 per cent, or 0.2p, to 613.2p.

Car dealer Pendragon has warned investors to brace for an annual loss at the ‘bottom end’ of expectations.

It said a fall in consumer spending hit it hard towards the end of last year.

Twitter
Previous articleChiefs and 49ers Super Bowl promises to be the closest one yet
Next articleInter Milan 2-1 Fiorentina: Christian Eriksen comes off the bench to make his debut