HHS alerts Congress it may need an extra $136 million to fight the coronavirus ‘health emergency’ that has infected 11 Americans and spread to 17,300 around the world

The White House is considering a transfer of $136 million dollars to the Centers for Disease Control and Prevention (CDC) and other government agencies for tackling the coronavirus outbreak, officials said Sunday.

In this year’s budget, $105 million was allocated to the CDC to spend on public health emergencies.

But those funds are being quickly drained by a swift and aggressive response to the coronavirus outbreak that experts say is on course to become a pandemic.

On Sunday, the Department of Health and Human Services (HHS) gave notice to Congress that it may need to use a provision to transfer funds to funnel more money to the response it, the CDC and other agencies are mounting to the outbreak, the Washington Post reported.

After HHS Secretary Alex Azar (pictured) declared the coronavirus a public health emergency in the US, his agency notified Congress it will need some $136 million more to fight the disease

It comes after HHS Secretary Alex Azar on Friday announced that foreign nationals who have recently been to Wuhan will be barred from coming into the US, and that citizens and their immediate families returning from China would face various forms of quarantine, depending on whether they traveled to the center of the outbreak.

And to facilitate this, screening is now being implemented at 11 US airports, through which all flights from China will now be redirected.

This means re-ticketing passengers, setting up quarantines, printing and disseminating information packets on the virus and its symptoms. 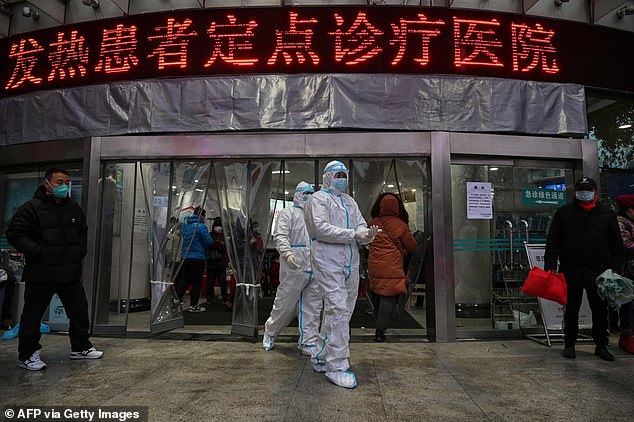 Medical staff members wearing protective clothing to help stop the spread of a deadly virus which began in the city, walk at the Wuhan Red Cross Hospital in China

Beyond the expenses that have and will undoubtedly pile up as a result of the travel precautions, there will be even more accrued for the development, testing, manufacture and delivery of a diagnostic test and (eventually, perhaps) vaccine as well as the costs associated with the testing itself.

The 2003 outbreak of SARS – another coronavirus that began in China and jumped from animals to humans –  cost the world $40 billion in the just six months that it was ongoing, though the cost to the US alone is unclear.

In just a little over a month since pneumonia cases now known to be caused by the new coronavirus were reported to the World Health Organization (WHO), more than 17,300 people have fallen ill and at least 361 have died worldwide. 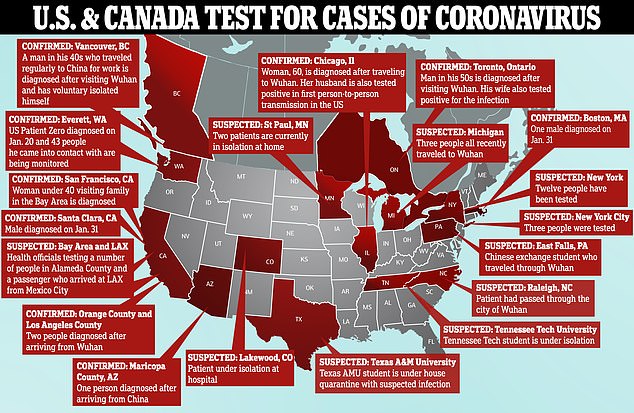 So far, 11 cases of coronavirus have been confirmed in the US and another 83 possible cases are ‘under investigation’ according to the CDC

The outbreak has already caused stocks to fall and global economic panic.

So far, just 11 cases of the new coronavirus, still known only as 2019-nCoV, have been confirmed in the US, but health officials have warned that they are all but certain more will be reported before the outbreak subsides.

And more cases will cost the US more.

The CDC has dispatched extra staff to the airports where screening has been implemented, as well as to areas where cases have been confirmed and contacts need to be traced.

It reportedly has some 200 people working on the coronavirus at its headquarters in Atlanta, Georgia.

Staff there are currently testing or awaiting on the arrival of samples taken from 82 Americans under investigation for the infection.

HHS told the Washington Post that about $75 million of the transferred funds would be allocated to the CDC, another $52 to the Assistant Secretary for Preparedness and Response, and $8 million for the Office of Global Affairs.

Older people have paid the most into our NHS yet often...